As the walls go up, the building takes shape quickly 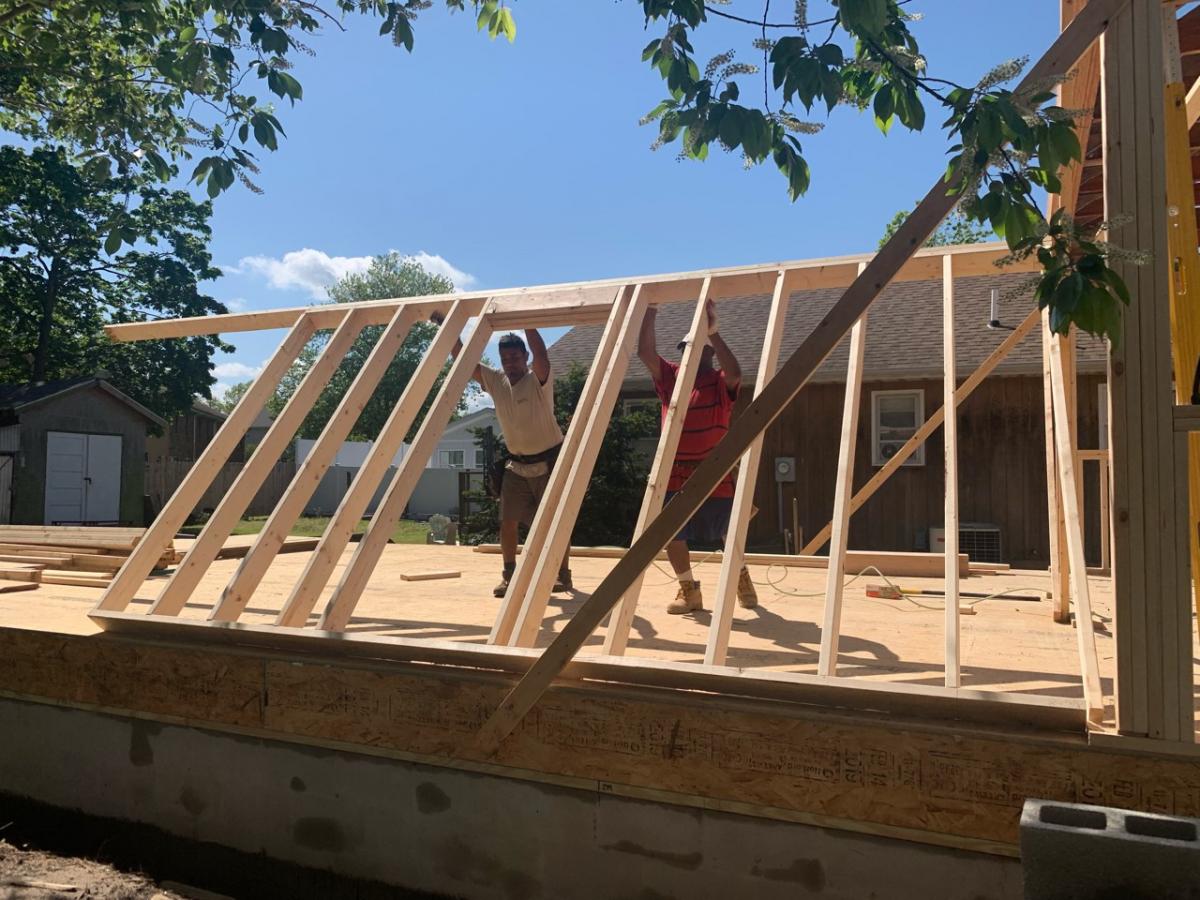 With the existing frame successfully lowered onto the new deck, the framing subcontractor’s crew turned its attention to wall framing. Once again, space limitations of the site came into play. Lack of storage space for materials meant dividing the framing package into several deliveries scheduled over several days. 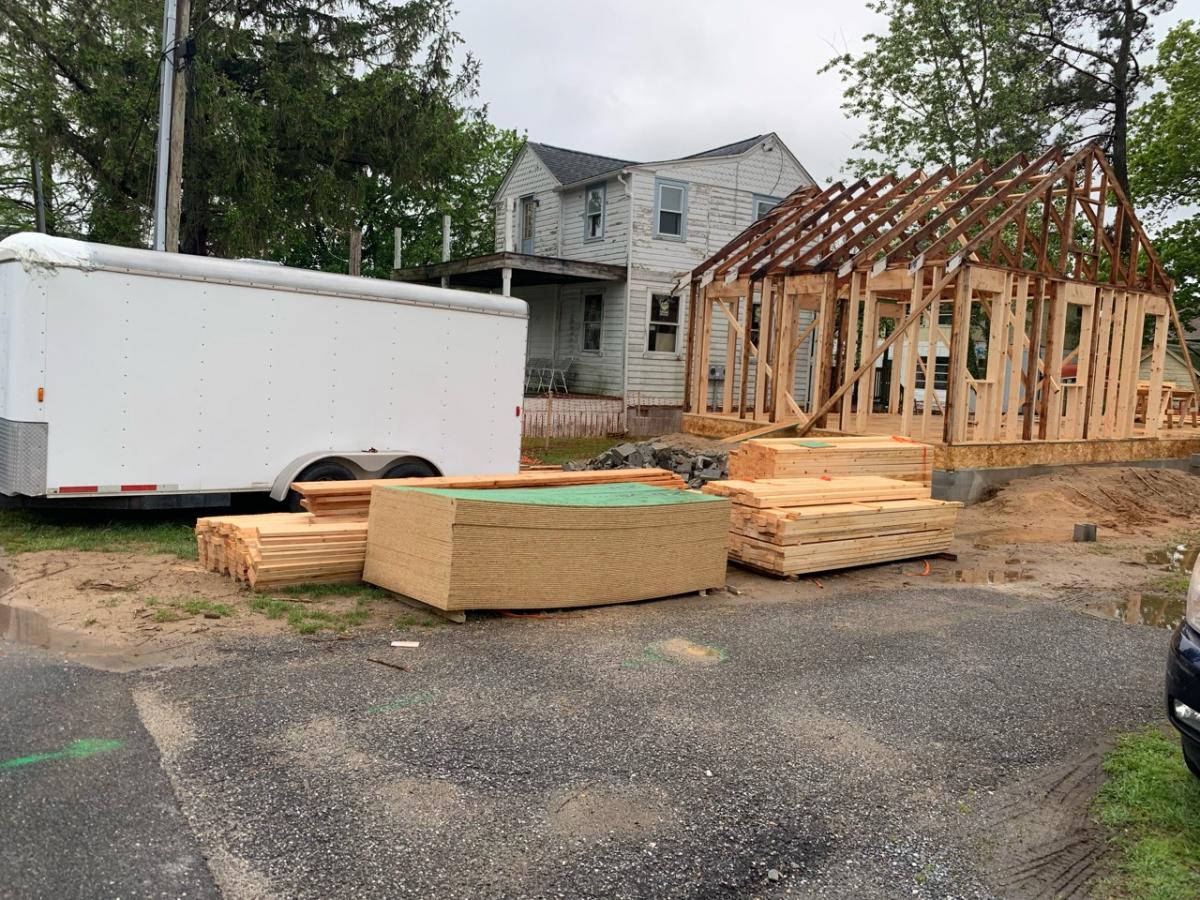 Work began with reframing the existing walls to relocate the entry and create the new window openings. The structural rear wall was removed and replaced with a triple LVL beam that picked up the load from the rear rafters and would open up the space below for the new kitchen. 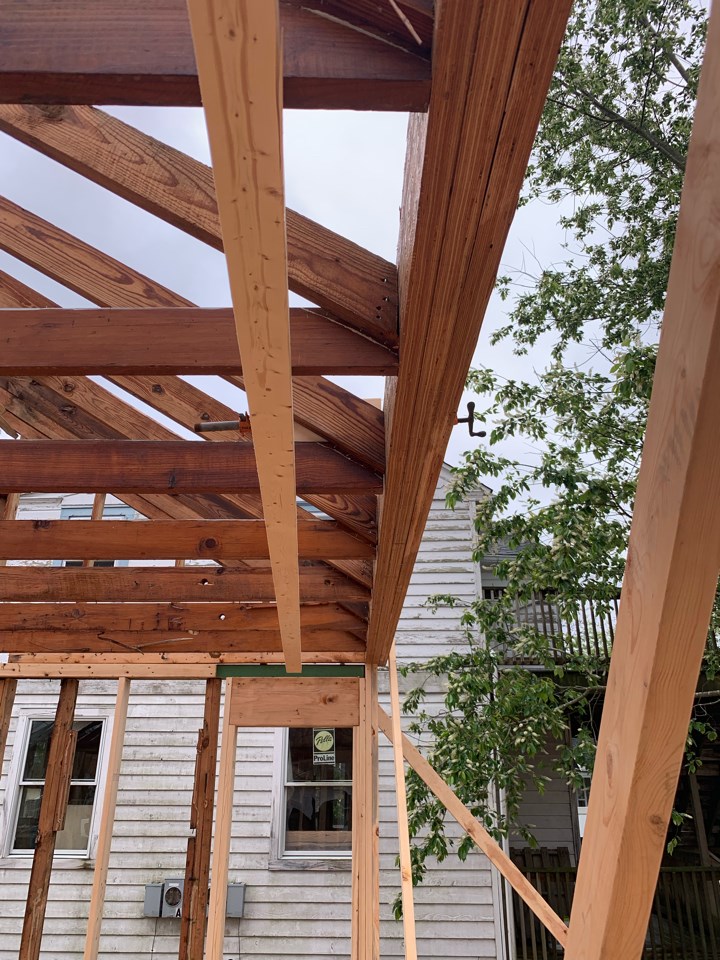 Framing began in the front section, where existing walls were reframed with 2x6s to create new openings for the entry and all windows. The structural back wall was removed and replaced with a composite LVL beam to bear the roof load.

Framing proceeded from front to back, with the crew working in tight quarters. Exterior wall height was the same all the way around the building, as was the height of the LVL separating the original section of the house and the addition, both of which were to have vaulted ceilings. 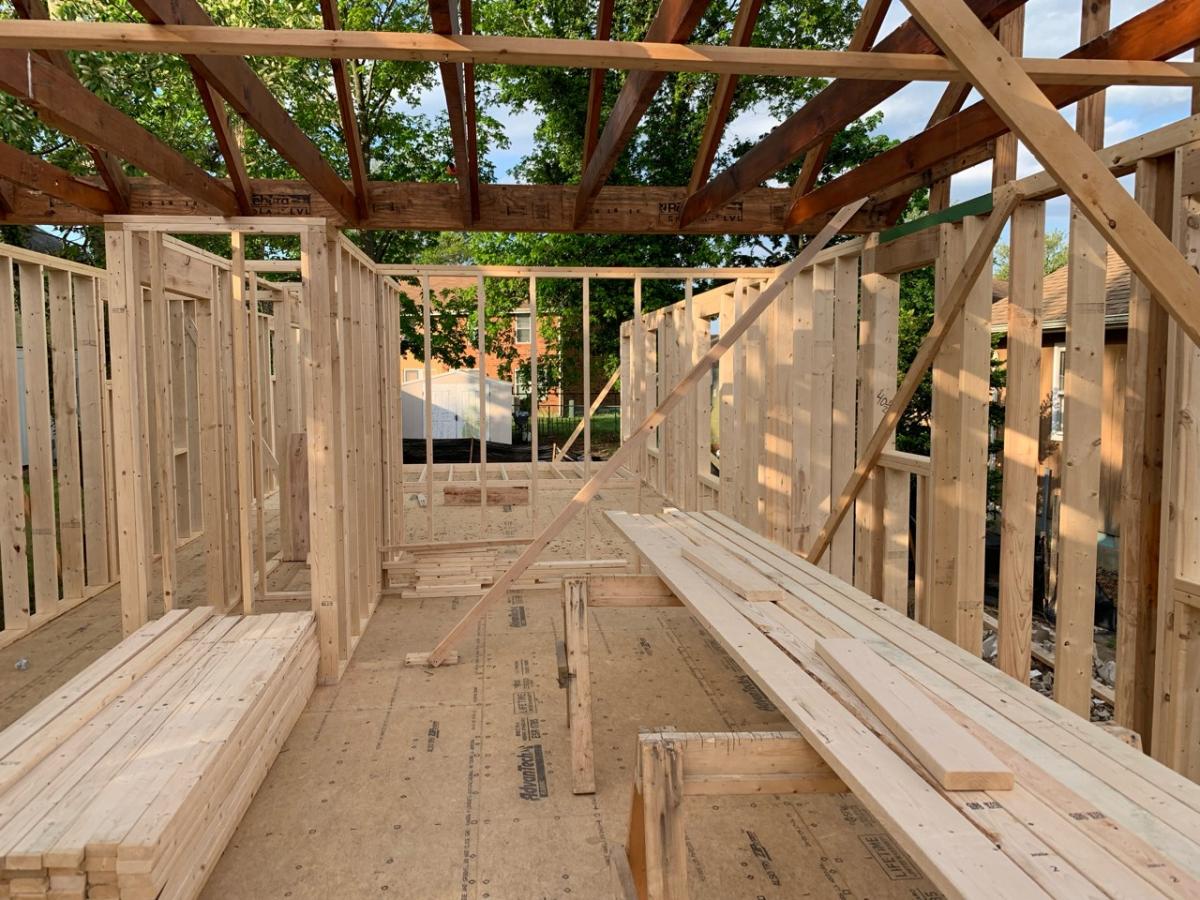 Working room was tight on the deck as well. Material for addition walls was cut in the open front section of the house, then passed back to the addition deck for assembly.

Ordinarily, the exterior walls and rafters would be framed, and the partitions would be built to meet the vaulted height of the collar ties. In this case, however, a delay in approvals for a roof framing change led to a decision to frame all of the wall, including partitions, to the height of the exterior walls, then build pony walls to extend the partitions to the collar ties after the roof was framed. Though some extra material was involved, this approach helped during roof framing because the tops of the partitions were used to support staging planks at the eaves and under the ridge. 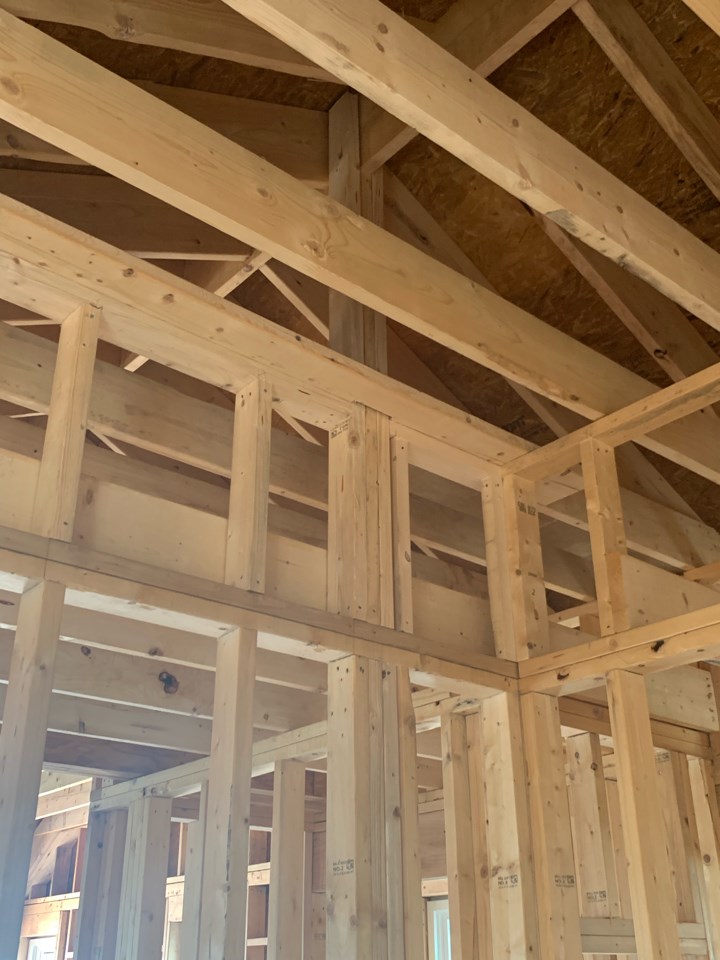 Partly due to a delay in the start of roof framing due to a change order, all interior partitions were framed to the height of the exterior walls. Beginning at the back wall of the new kitchen, where ceiling of the addition is vaulted, pony walls were added on top of partitions after collar ties were in place. One advantage of doing it this way was the ability to use the partitions to support staging planks during roof framing.

With the wall framing finished and the roof change order still pending, work moved to wall sheathing, which we’ll look at in more detail in our next post. Boardwalk Builders project manager Mike Eckert says he likes to sheath the walls before framing the roof anyway because it firms everything up and gets most of the temporary bracing out of the way. In this case, he also wanted to sheath walls because he didn’t have room on the lot to store two pallets of sheathing, one for the walls and one for the roof. 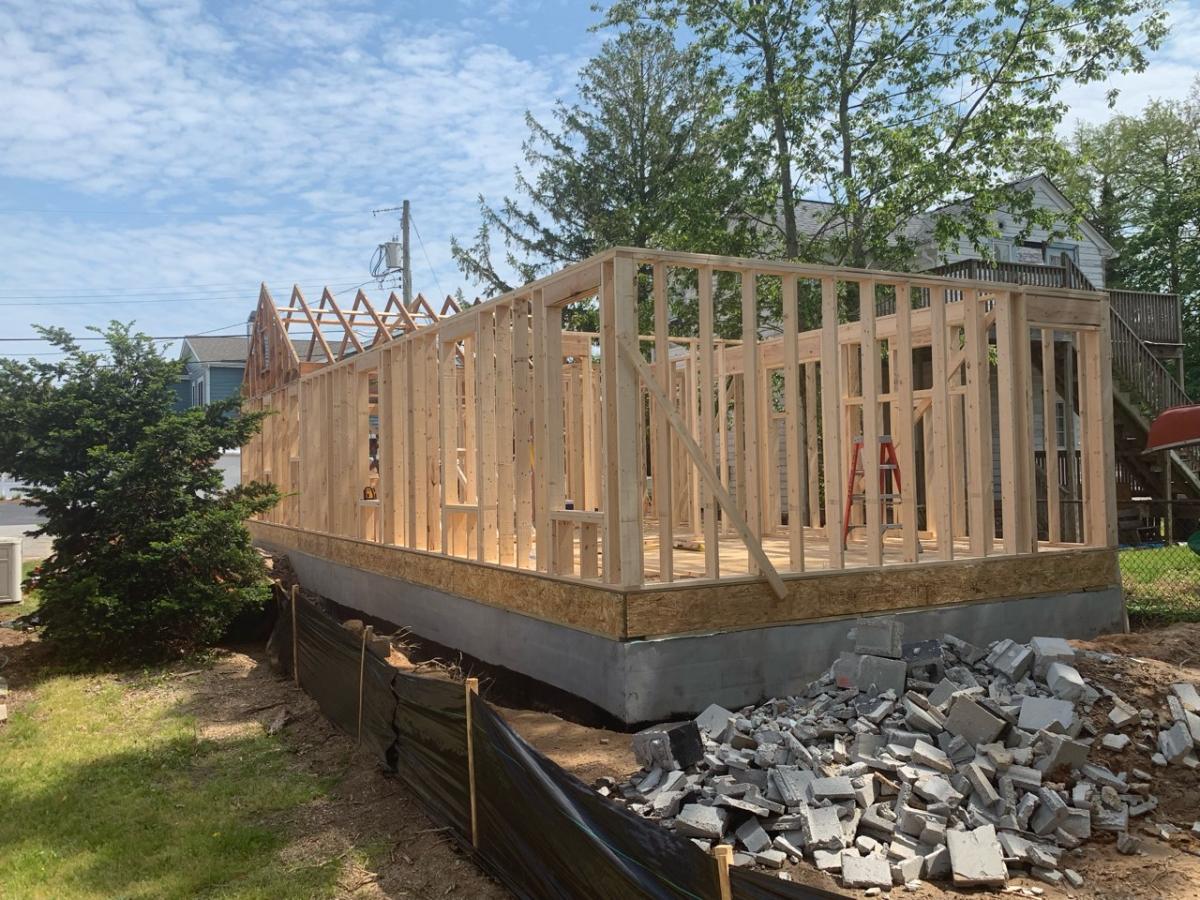 Wall framing is complete, except for the porch, which will be framed after mason’s return to remove debris and build the support piers. Next up: ZIP System sheathing.