A glitch in layout results in an out-of-square foundation. The solution keeps the framing crew going and re-engages the masonry crew. 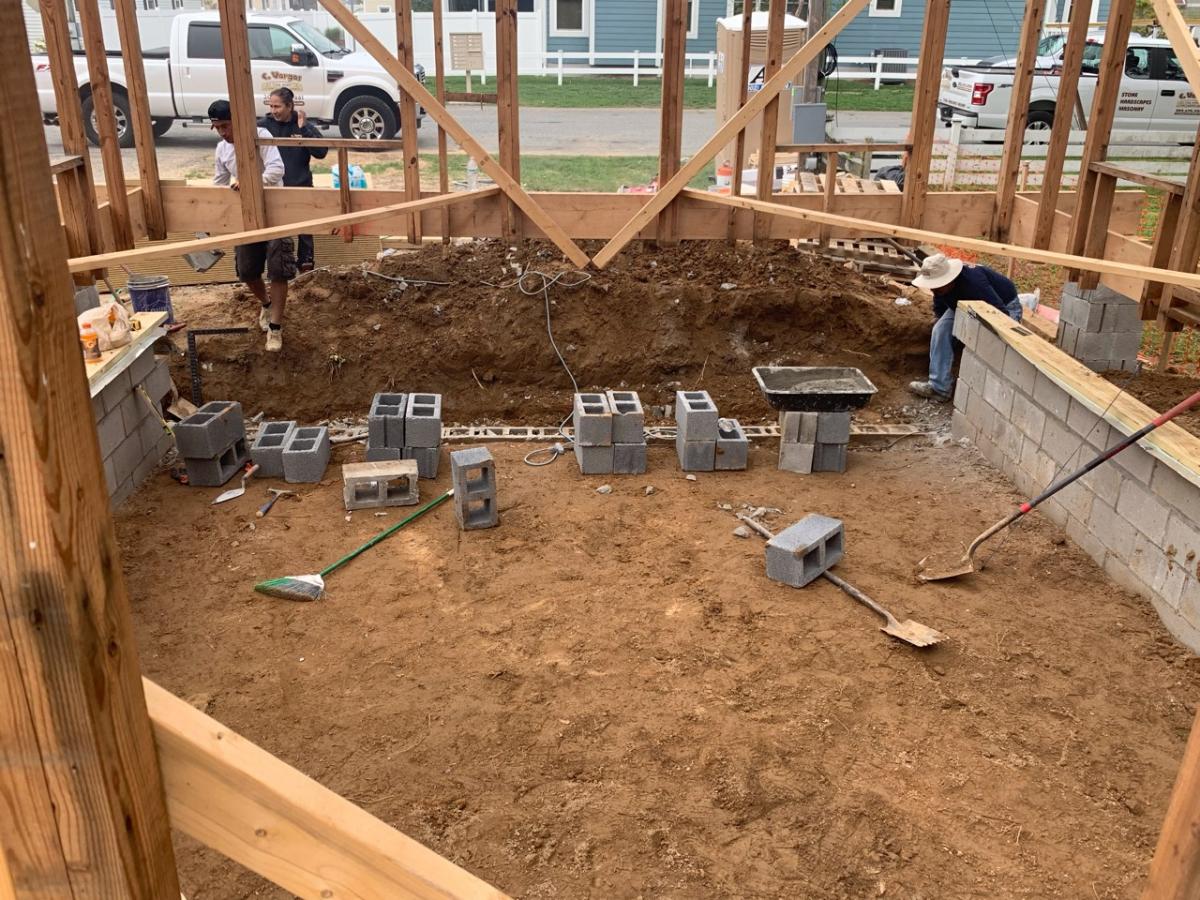 Glitches are a fact of life in remodeling, and while everyone strives to avoid them, when they do occur it’s how you handle them that matters. Everyone goes into the job with Plan A, but it’s Plan B that gets the project built.

We’ve already seen how hidden conditions discovered during demolition at Boardwalk Builders' Model ReModel East project changed the plan for the footings, the foundation, and the framing, and led to the temporary elevation of the existing frame. Plan B came into play again as the framing crew was laying the first few sheets of subflooring. Something was off: The edge of the first two bricked panels was running at an angle to the I-joists. When they checked the rear corner of the foundation, they discovered that it was 2¾ inches out of square.

The trench-form footings had been dug extra-wide to make foundation layout work go a little faster. When it came time to start laying block, project manager Mike Eckert says, the masonry crew takes time to square the first course. As the masons were setting their pins, Eckert confirmed their layout was square. The finished walls were plum and straight, so something else must have gone awry. “I think somebody stepped on a pin,” Eckert says.

There isn’t a framer alive who hasn’t had to adjust for an out-of-square foundation, but a 2¾-inch offset was too much to overcome in the framing. Eckert set aside the question of how and why it happened, and quickly came up with a plan of action to correct it. To keep the framing crew going, Eckert decided to move all of the I-joists. That required removing the rim board, cutting the nails that held the joists to the plates, then repositioning and refastening everything. With four framers working on it, everything was squared up in less than an hour.

That took care of squaring up the framing, but the foundation was still a parallelogram. Eckert’s solution was to ask the masonry subcontractor to rebuild the front and back walls. It was not an easy conversation, but Eckert is not a screamer and preserving the relationship was an important secondary goal. “He’s a good guy,” Eckert says. “He shows up and his people work hard. And they take on everything, not just the easy work.”

Both walls were rebuilt while the framing continued. At the rear wall, two I-joists were removed to provide room for the masons to disassemble and rebuild the wall. At one corner, several blocks in the first course were removed and reset 2¾ inches in toward the crawlspace. The reminder of the first course was left in place, and subsequent courses offset. 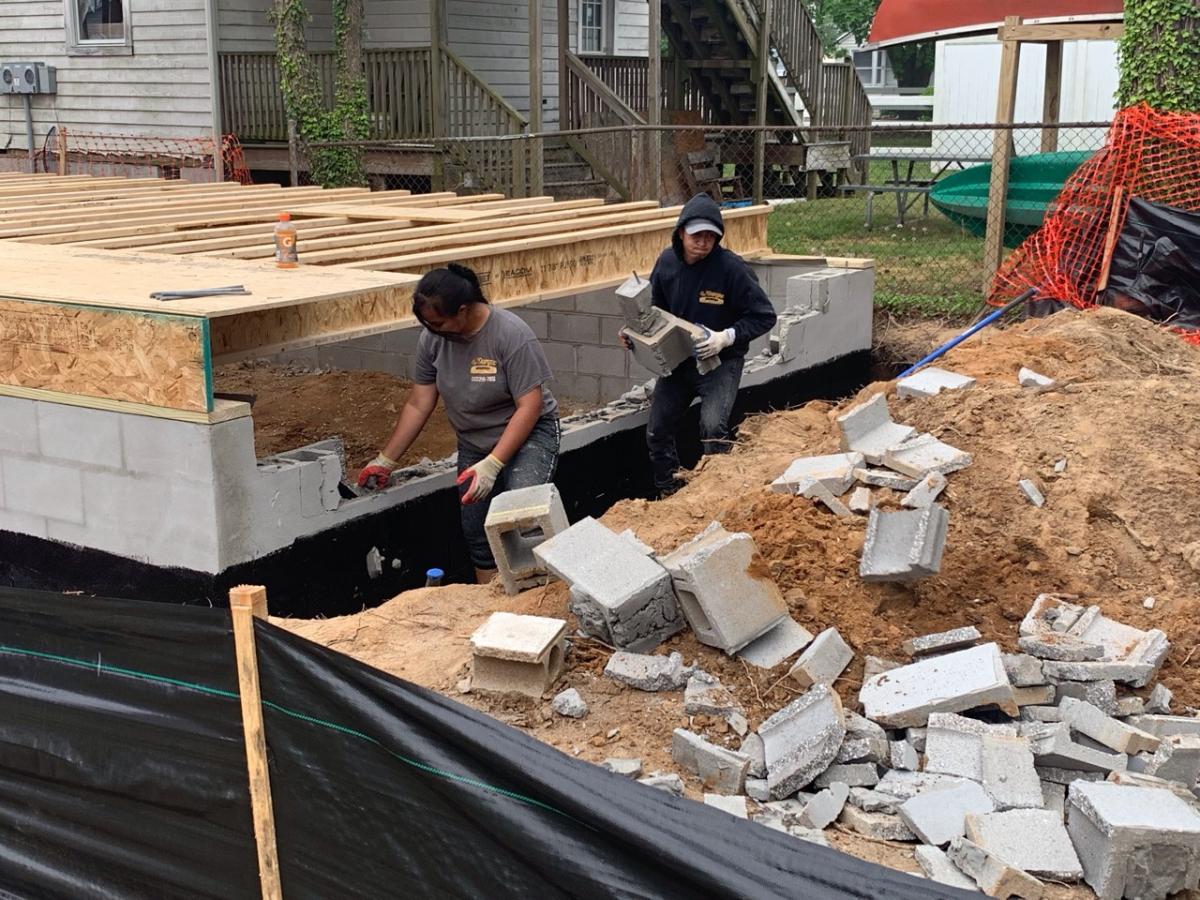 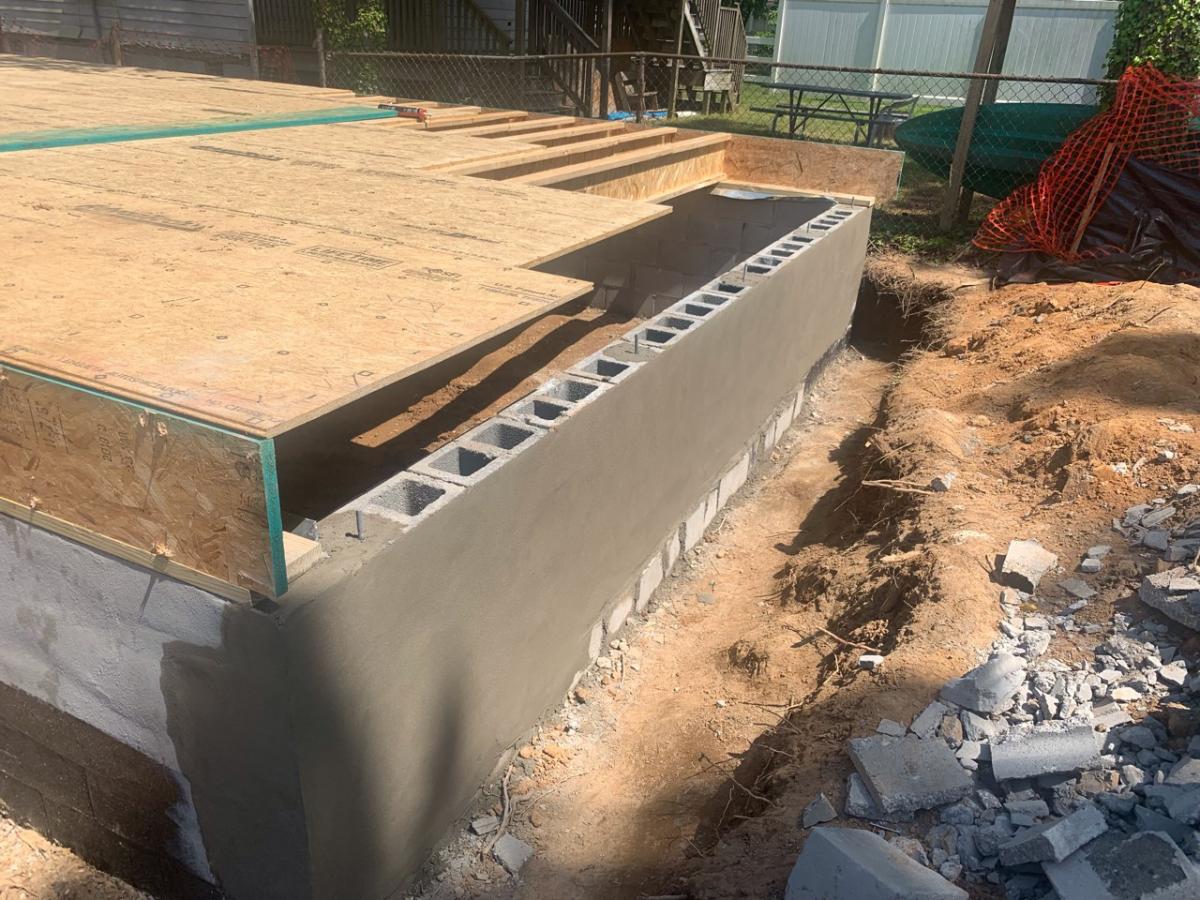 Framing continued as masons began to dismantle the rear wall (left). Several blocks in the first course were reset inwards to establish a square corner; the remainder were left in place and subsequent courses were offset (right).

The front wall was treated the same way, except that one corner had to be moved outward. Masons worked under the existing frame, which was still temporarily supported above the foundation, to disassemble and rebuild the wall. By the time they were sponging a new coat of parging, the framing had been all but completed. After the masons finished, the framers installed the final joists at both ends, and reattached the rim board. 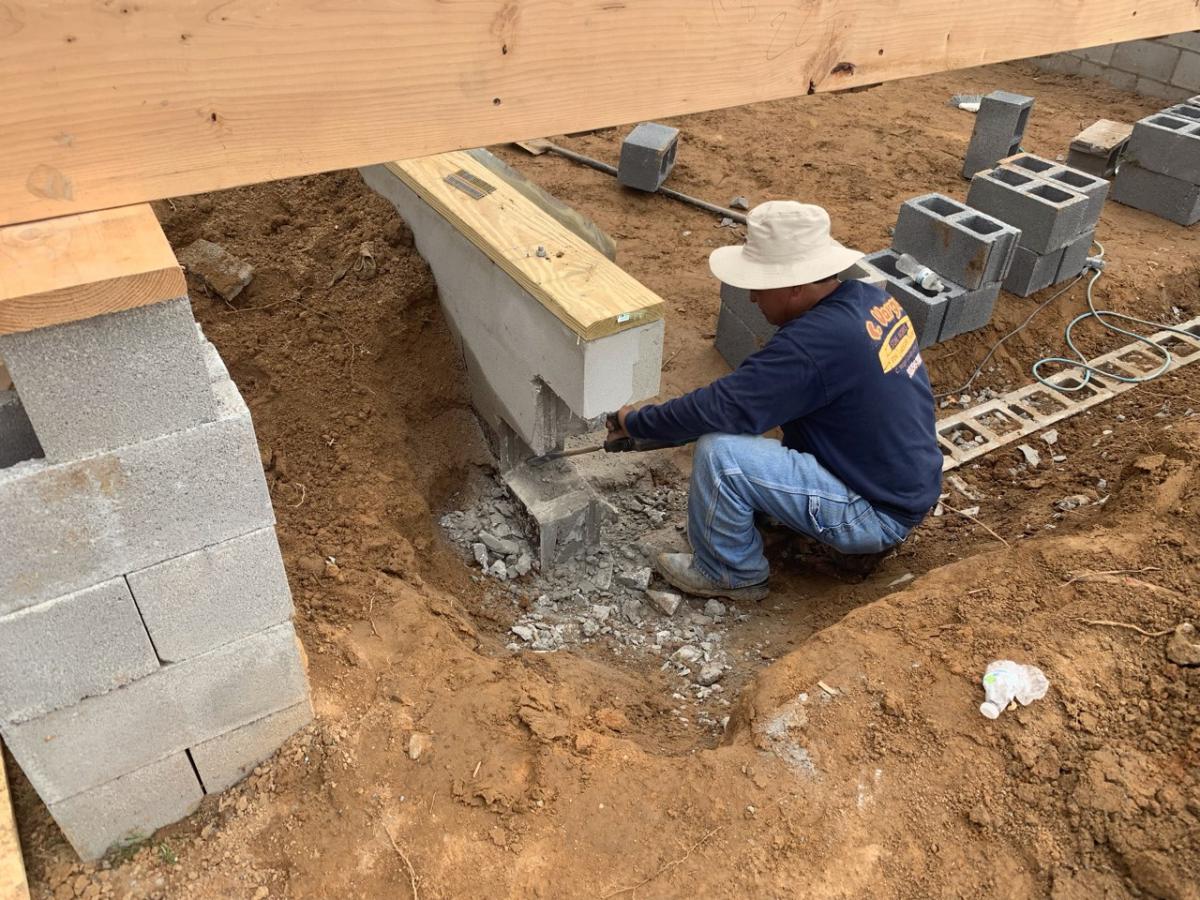 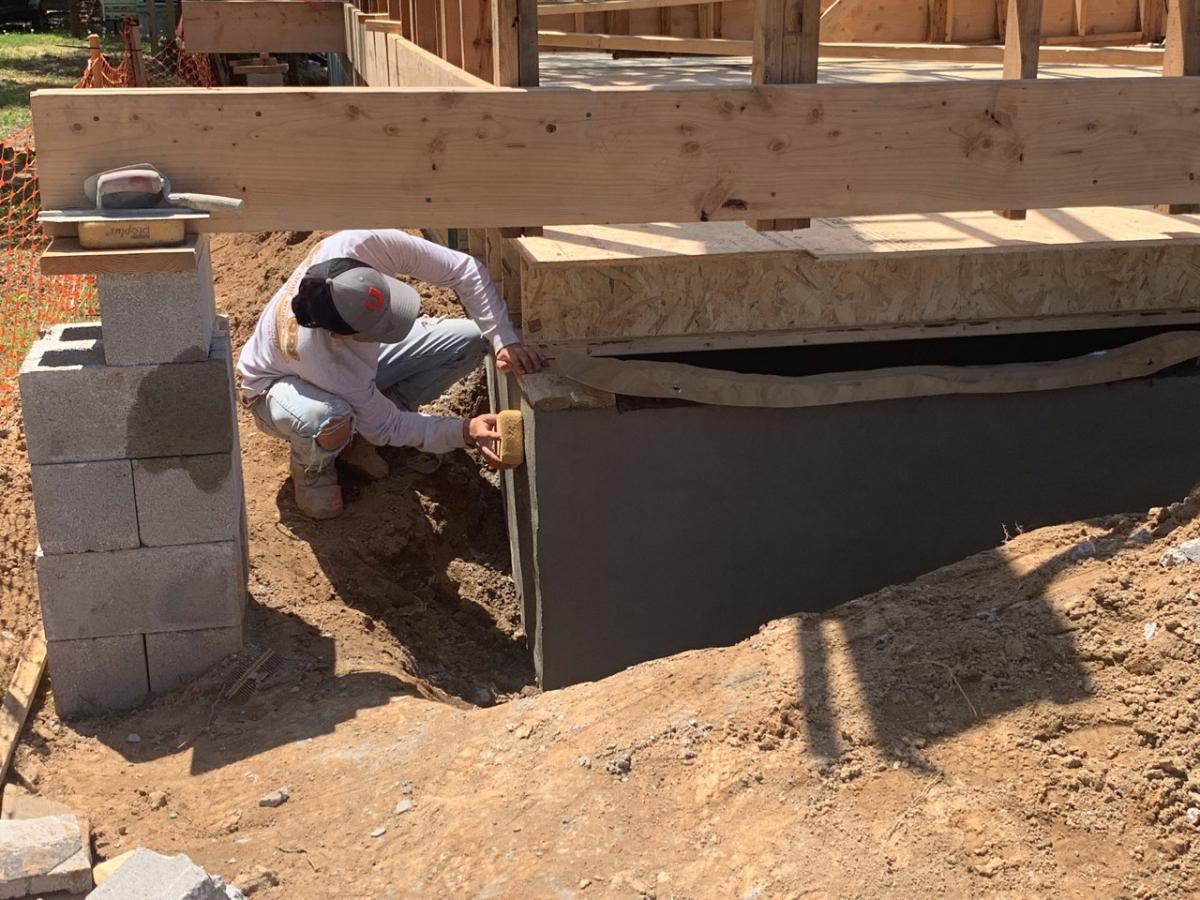 At the front wall, one corner had to be moved outward (left). After new parging was sponged smooth (right), framers installed the final I-joists and reattached the rim boards.