The biggest surprises in remodeling often occur during demo. This job is no exception.

In an earlier post, we looked at conditions uncovered during demo that led to a better understanding of how the building’s foundation was constructed. That information ultimately led Boardwalk Builders to a foundation and framing change order, which we’ll explore in a future post. But first, let’s back-track to look at what else was learned about the original structure during demolition.

Demolition didn’t start until after the cement-board siding was tested for asbestos. Like many remodelers, Boardwalk Builders uses a third-party testing company on all their projects—in this case, testing was performed by TS Environmental Testing LLC in Philadelphia, Pa. The tests were positive for asbestos, so C&H Environmental Service was hired to remove and dispose of it. This is standard procedure at Boardwalk Builders, according to the company’s estimator, Don Stewart. “There’s a procedure for removing, bagging and tagging asbestos, and taking it to the landfill that requires certification,” Stewart says, and it just makes sense to sub that to a specialist. Considering the alternative (training for in-house certification, increased liability insurance, etc.), the cost is reasonable—testing and removal on this project totaled about $3,500.

Removal of the cement-board siding and interior wall coverings revealed typical beach cottage construction, consisting a rough-sawn 2x4 stud frame to which clapboards were attached directly, without sheathing or a layer of paper in between (pictured below). The only plywood sheathing used was applied years later, when the side porch was enclosed. Some mild wracking had occurred, but not as much as you might expect in walls without diagonal bracing. (In such a small, light structure, adequate shear resistance seems to have been provided by the combined effect of horizontal wall blocking, siding fasteners, and vertical T&G pine board paneling on the interior.) 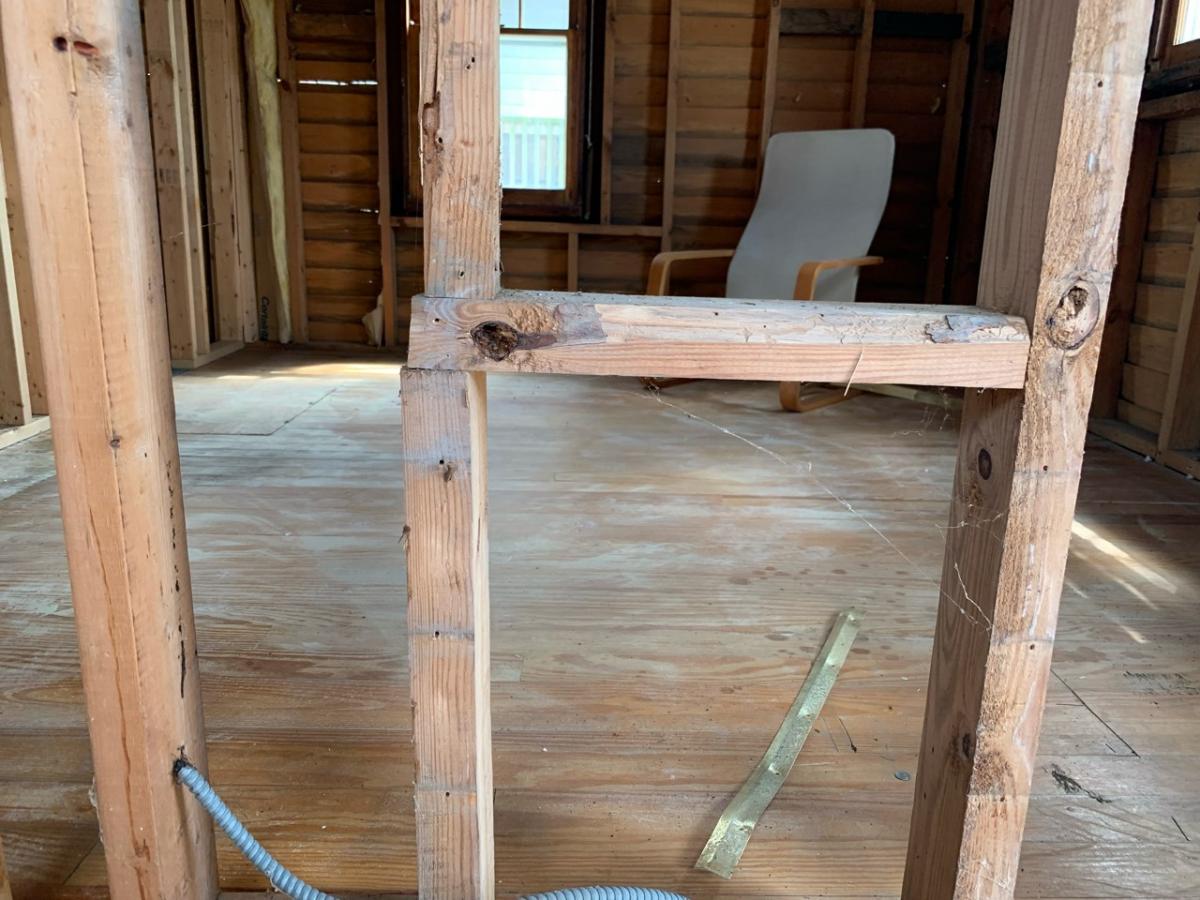 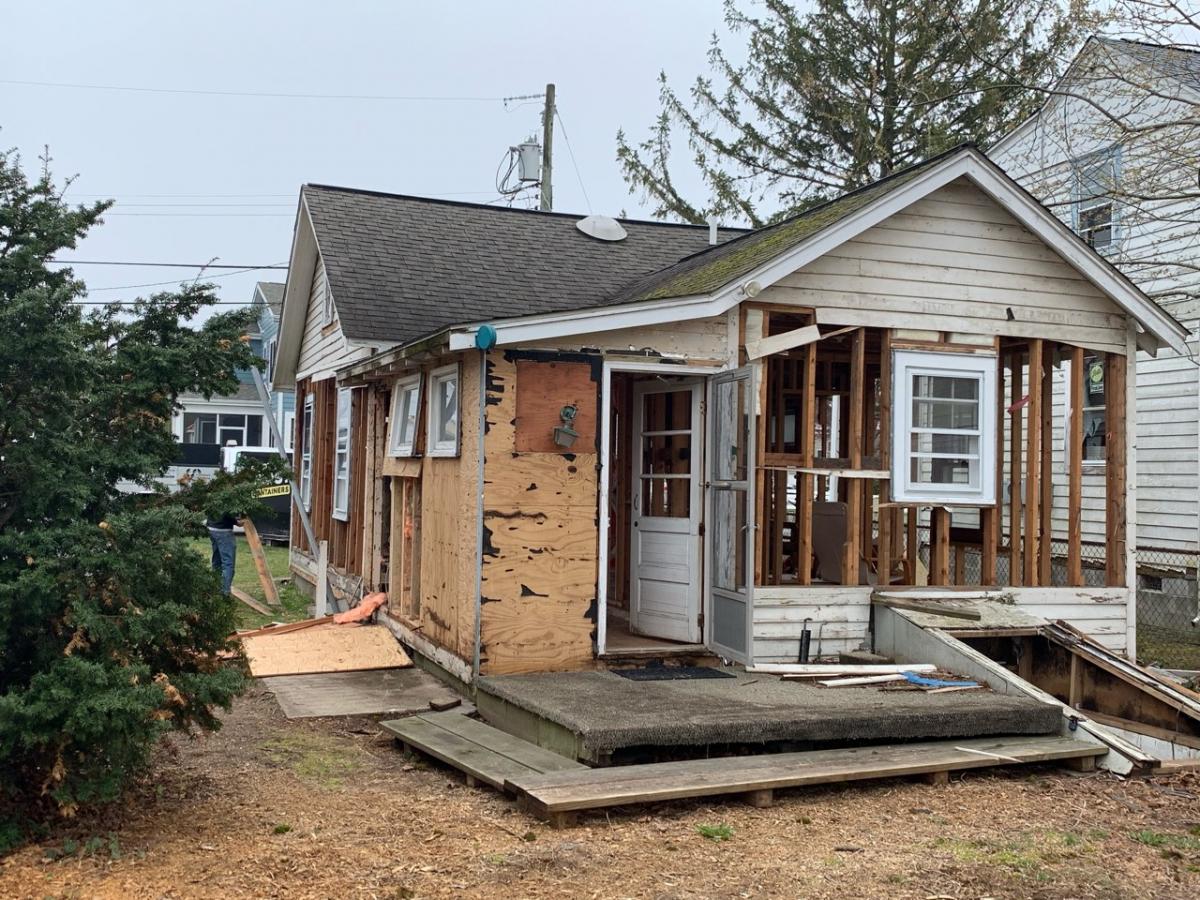 The walls in both the original cottage and the rear addition were constructed of wood clapboards applied directly to rough-sawn studs (left). The only plywood sheathing found was installed years later when the side porch was enclosed (right).

Demolition is always a compromise between speed and care. It’s easy to knock stuff down, but it’s also important not to damage existing materials and any structure that will be left in place. And safety is always a concern as well. “The older a structure is, the less you want to disassemble it,” says Mike Eckert, project manager on the job. “When you have to start guessing about how things were put together, it’s better to get it on the ground.”

At the front of this building, where the original cottage framing needed to be preserved, the demo crew used pry bars to disassemble interior and exterior materials. Not so at the existing rear additions, however, which needed to be removed altogether to make way for the new addition. There, the porch roof was dropped in one piece after removing most of the walls framing and using a chainsaw to cut the rafter connections to the main house. 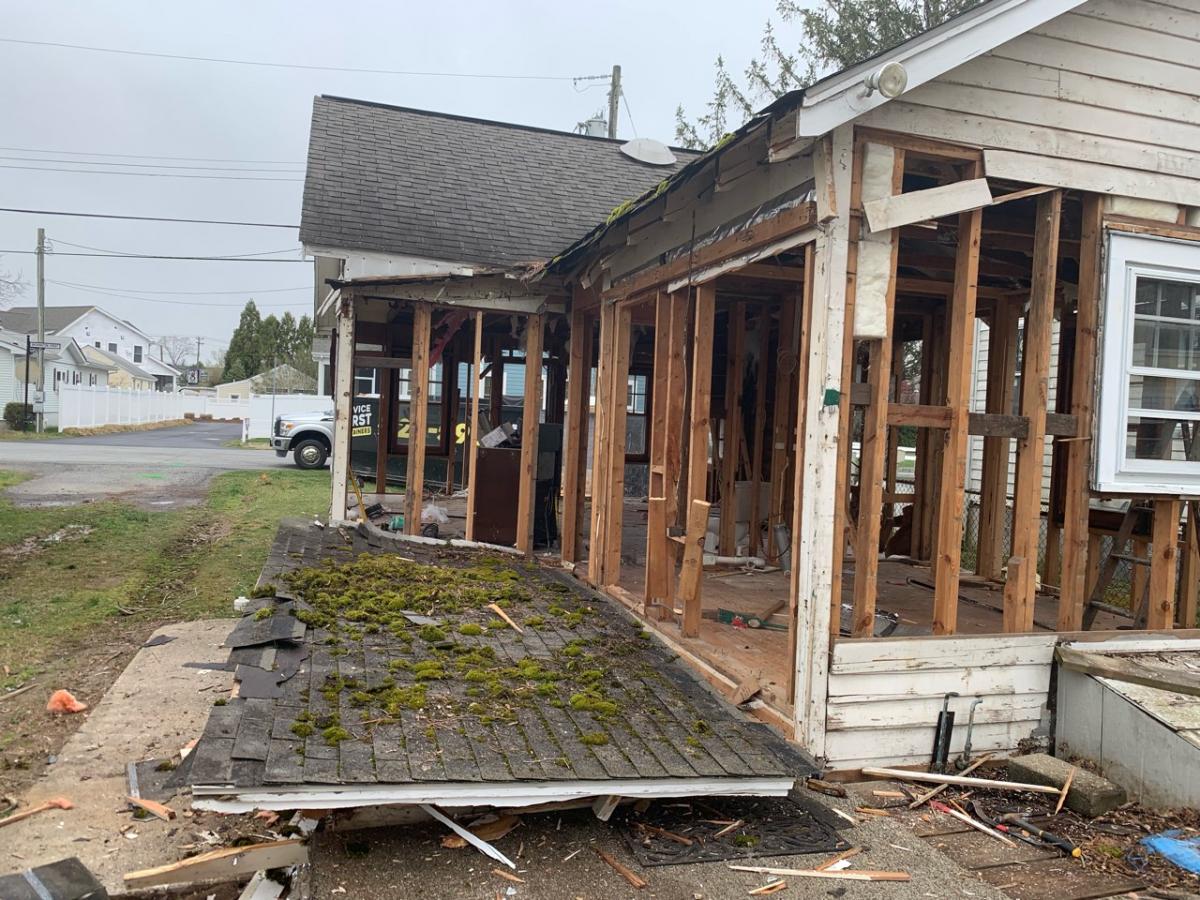 The roof of the porch was dropped in one piece after removing most of the wall supports and cutting the rafter connections to the main house with a chainsaw.

The slab-on-grade underneath the porch was broken up by the mini-excavator. “Usually, we can lift a small slab and flip it, which breaks it up,” says Eckert. “But the Dingo was too small, so we lifted one corner with the Dingo, placed a piece of broken cinder block underneath, then broke it with a sledgehammer. The slab was not that thick and not reinforced, so after using the blocks and sledge a couple of times, it broke into pieces small enough for the Dingo to handle.”

That left only the rear addition, which had to be removed down to the top of the basement walls. The fact that the structure was small (about 12x15 feet) gave Eckert the idea for the easiest and fastest way to remove it. Rather than risk dissembling the entire structure—a process that gets riskier the more material is removed—Eckert decided to combine deconstruction with controlled brute force. “Once we got all the roofing and lap siding off,” Eckert says, “we cut the ridge where it was tied into the back of the main house, and knocked out every other stud with a sledge hammer.”

The final step was a thing of beauty: “We put ropes around the gable end top plate, got everybody out of the way, and five guys pulled it down.” 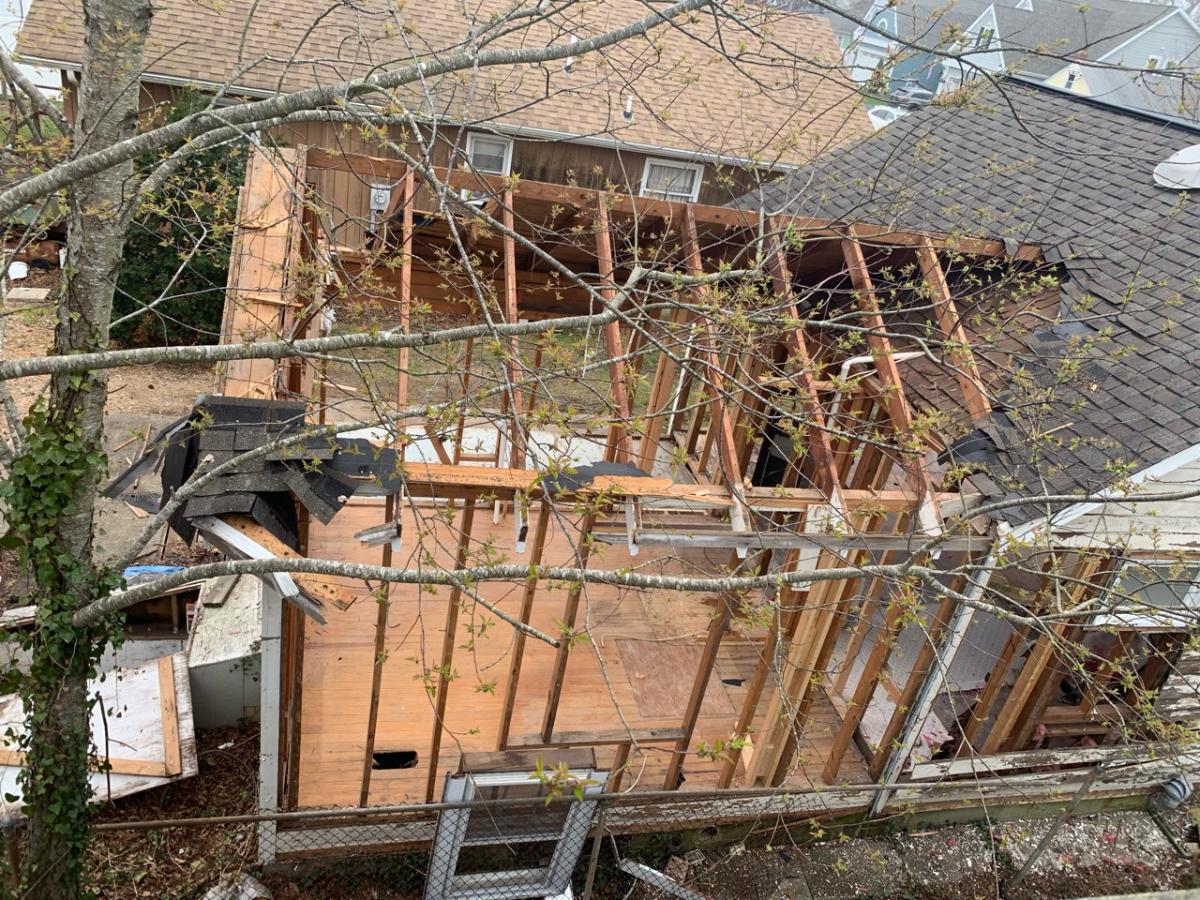 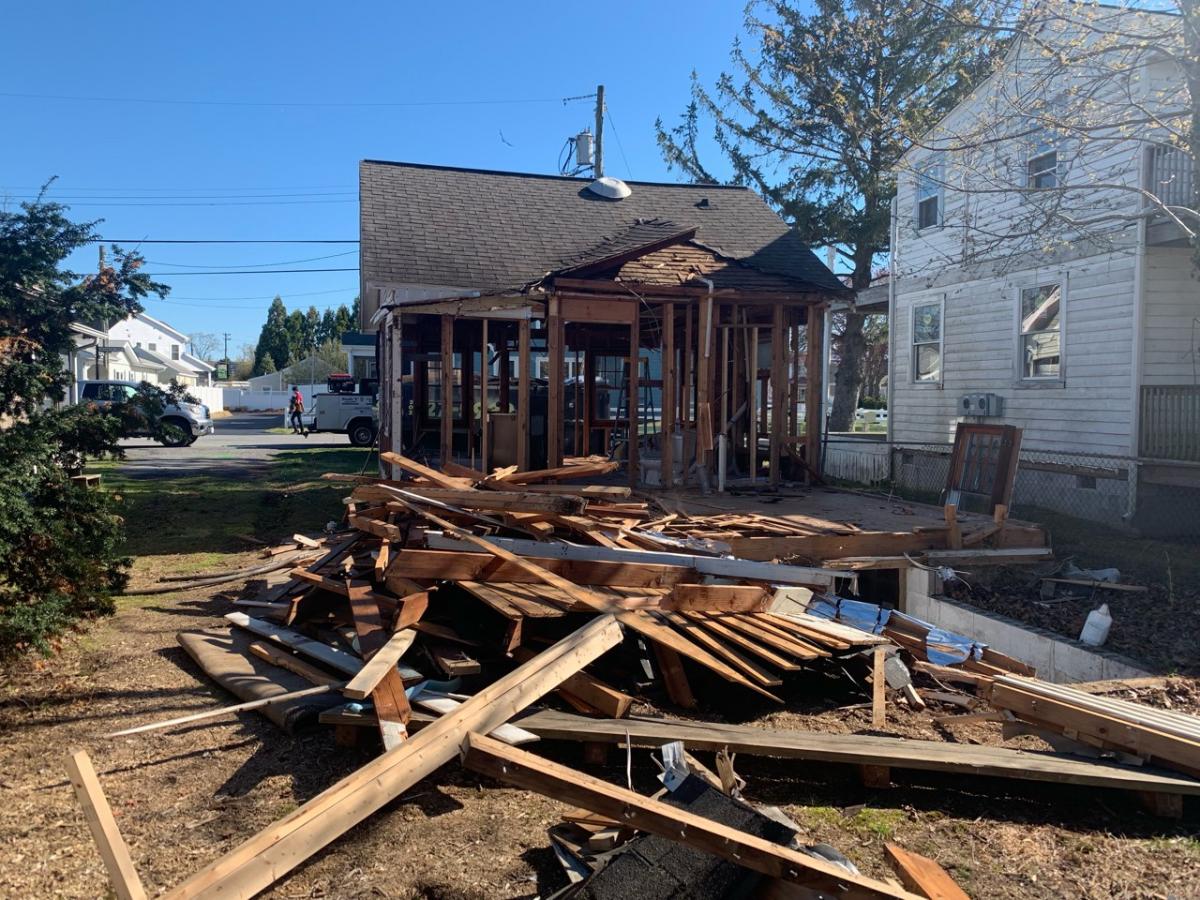 After stripping the roofing and siding from the rear addition (left), the five-person demo crew cut all connections of the remaining frame to the main house. They then tied ropes around the gable wall top plates and pulled it to the ground.